Terry Marie Ananny (née Broughton) is a Canadian fine artist born in Toronto, Ontario.  She showed an early interest in art and moved to Ottawa in 1975 to attend Carleton University where she attended art classes and group showings with the Ottawa Art Association and discovered the works of the Group of Seven’s Marc A Fortin, Clarence Gagnon and Emily Carr at the National Gallery of Canada. Their work was the inspiration behind her vibrant style which continues to evolve. Terry’s subjects often feature domestic scenes, townscapes, landscapes and figurative work.
​
Terry Ananny’s vibrant acrylic canvases often feature children at play and Quebec seasonal village scenes which capture the spirit of Canadian life. Her works are held in many Canadian and international corporate collections. Canadian Prime Ministers, Governor Generals and the Government of Canada have collected her work over the past three decades. Her work has been reproduced on UNICEF, Make-a-Wish and Save the Children holiday cards. In 2000 her work was commissioned for a Canadian coin design in the Provincial Legends and Fables series depicting a Nova Scotian fable. Her paintings are seen in the Canadian government retreat Wilson House. 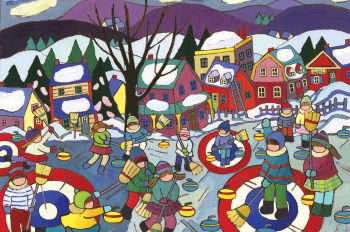 Curling on the Ottawa River

More Details
Don't have an account yet? Register Now